This is for you if you're looking to experience the thrill of skydiving with instructors at your side--not attached to you from £380.00
This skydiving experience is often more rewarding because, after 6 hours of ground instruction, you're in control of the skydive. The Accelerated FreeFall Skydiving instruction is much more detailed than a Tandem Skydive because you're in charge..

Two skydiving instructors exit the airplane with you and fly by your side to coach you (using hand signals you learned during your training), and assist you if necessary during your nearly one minute of freefall. The instructors will leave your side after you deploy your own parachute and fly it down to land!.

Levels 1, 2 & 3 consist of launching from the aircraft with your two Instructors holding you in the freefall position and staying with you until the parachute is opened. You will have drills to perform on each of these jumps. On Level three you will be released by one Instructor at a time providing you are in a stable position.

Levels 4 & 5 are made with one Instructor only with a linked exit and you will then be released to fly on your own. There are a number of in air drills to perform during freefall before deploying your parachute.

Levels 6 & 7 again with one Instructor only but this time it will consist of a “solo” exit although the Instructor is with you all the way down until the main parachute is open. These skydives introduce new skills to complete and end with you putting all the manoeuvres together on the level 7 skydive.

Level 8 is a short freefall delay from 5,000 feet, deploying your parachute in a stable position within ten seconds after exit, and is your final qualifying descent.

AFF course students are far more successful if they have some continuity on the course. This normally means you will have to put aside 3-4 weekends clear to complete the course. Once the AFF phase is completed, your consolidation jumps will enable you to practice what you learnt on the course as in most cases you would only get one attempt at the skills. Once these consolidations are completed you are the master of your own destiny, free to decide what the next challenge is going to be and where your newly acquired skydiving skills will lead you…

What Does It Cost

ALL REJUMPS AT A LOWER PRICE – CONSOLIDATION JUMPS @ £45 EACH

The AFF course can be done as an individual or in a group with a maximum size of four students to one Instructor. It consists of eight jumps which are classified as Levels 1 – 8. Payment is only required initially for the Level 1 training course and jump by making a deposit online and paying the balance on the day of the course. Subsequent levels will be charged at the end of the day the skydive takes place.

After the Level 1 you will be debriefed by your Instructors and the skydive will be written up in your personal log book. Further levels will require an intensive brief session and “dirt dive” before manifesting for your place in the aircraft.

After completing the eight levels you are qualified as a Level 8 AFF student allowing you to jump out of an aircraft on your own, under supervision of a qualified Instructor.

The next step to achieving your full qualification is to complete ten consolidation jumps, following a set sequence for each skydive, practicing and honing the skills you have already learnt and introducing new features such as exit position and canopy skills. These jumps include kit hire, Instructor supervision and a parachute repack. Upon completion of the consolidation jumps and a Canopy Handling (CH1) question paper you are now qualified as an “A” Licence Skydiver.

If you fail a level it must be repeated before you can progress. A level can be failed due to lack of altitude awareness which is normally caused by enjoying the skydive so much that you forget to deploy your parachute! If this happens, excluding level 1, and the Instructor has to pull for you, then you would fail that level and have to repeat it. You might also fail a level if you cannot remain in control and the Instructor has to stop you spinning or you have problems showing control in freefall. The vast majority of students very rarely fail more than one level if they show a bit of commitment.

All AFF jumps, (Excluding Level 8), are done from 12,000 feet whenever possible. Occasionally it is possible to get more altitude but sometimes due to weather or London Air Traffic Control restrictions it may only be possible to jump from 11,000 feet. This exit height is perfectly acceptable, however, we will always try to get 12,000 feet when jumping AFF students.

All students are required to have a minimum of BPA provisional membership which is included in the cost of the Level 1 course. This paperwork will be completed on arrival at the centre.

Students who wish to continue will have to upgrade their BPA provisional membership to a FULL BPA membership before they can continue. Costs of upgrades are on a downward sliding scale as the season progresses.

Personal Accident insurance cover can be arranged at the centre on the day if required.

A medical form BPA form 115-C is required for anyone if you have any medical conditions then you will require to take the form 115-D to your medical practitioner. This form must be stamped and signed by a doctor and brought with you on the day of your skydive. This form may be downloaded below in the 'useful links area or from your online portal. A letter of parental consent is required if you are under 18. The minimum age for parachuting is 16 years and the maximum age for this course is 55 years. The maximum weight limit for this courses is 16 stone (100 Kilos). 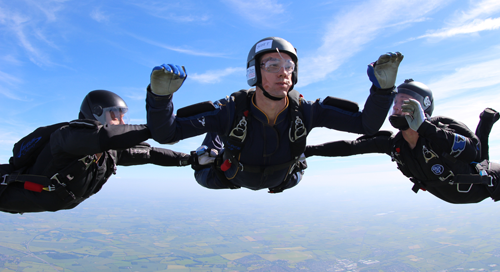 How can i book? you can use our online booking system with a debit/credit card or paypal. Or you can call us on 0800 009 3015 and pay over the phone

Booking? It is best to book at least 2-3 months in advance if you want to carry out an AFF skydive.There is no better feeling than skydiving from an aeroplane , and you should allow 2 days for the level 1 ground school and descent